When my baby girl was born premature, I didn’t think twice. I grabbed the hospital-provided pumping supplies and proceeded to pump like a fiend. Well, actually, my husband had to grab them and nudge me awake every 2-3 hours to pump. I was trying to recover from a c-section and was properly drugged up. Once we got home, the duties fell to me. It was hard, but I did it. I pumped 8-10 times a day, while also visiting my daughter at least twice a day. It was no easy feat, but I happily did it. Hell, I produced so much milk, I had a surplus. A nice stash I proudly flaunted on Facebook.

That damn stash haunted me in June after Imogen came home. 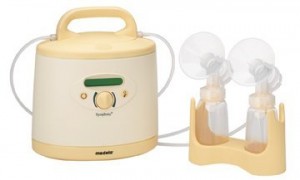 No one really gave us any real advice about how to switch to mostly breastfeeding after we got home. I called the lactation consultants at the hospital and they told me that I needed to stop pumping. So, for 4 days, that’s what I did. WORST. ADVICE. EVER. I almost completely lost my supply. I went from an oversupply, to almost losing it. For the next couple weeks, I struggled with trying to breastfeed Immi, and then supplement with a bottle from my frozen stash. When the stash ran out at the end of June (woohoo! I had a month’s worth. Yay me!), We had to go to formula. We started with Similac Neosure.

After a week or so of being home from the hospital, Immi started getting super fussy. All. day. long. She would sleep well at night though, so it could definitely have been worse. But if she was awake, she was fussy. You could clearly tell she was in pain, and that was why she was fussy. She would scrunch up her whole body while screaming, then let loose a machine-gun torrent of poots or an explosive boom of poo, and she would settle for a few minutes until the cycle started over. It was really hard to see her go through that. In one of her diapers we found this long stringy bit of blood, and her poo was really mucous-y. Come to find out both of those things can indicate an allergy of some sort. The most common of the allergies is milk protein (not lactose). Neosure had milk in it. So, at the advice of the pediatrician’s nurse, we switched to Similac Isomil (Soy). After a little over a week, it wasn’t getting better. I had cut dairy out of my diet, cuz milk proteins that I eat make their way into the breast milk. I had researched milk allergies, and something like 30% of kiddos with milk protein allergies will also have problems with soy. Lovely. We talked to the nurse again, described things, and she recommended Similac Alimentum. The most expensive damn formula on the planet. Some insurance companies cover such things, lucky us, ours doesn’t. The first day on that formula she was a completely different creature. She could actually sit in her swing or lambie chair and just be happy to be looking around. No screaming, no crying, no scrunching. My baby is allergic to milk protein and soy. And I thought my gluten-free lifestyle was a pain.

Back to my supply issues… Mike finally got frustrated enough, and I couldn’t bring myself to do it, so he called a lactation consultant. We went to visit her. She was very pro-attachment parenting. We are not. So, that was kinda odd. She told us things like, “a crib is for nighttime sleeping only. you wear your baby during the day.” Or my fave, in response to our desire to be able to bottle-feed a couple of times a day so I can have a break to do things or to just have a break, “nonono, you can leave the house, just don’t go beyond a 10 mile radius so you can come back quickly to feed the baby”. I paraphrase, but that’s the gist. But the clincher, the pièce de résistance was her math skills, or lack thereof. She said that we needed to feed the baby two times her weight in ounces. So, the way she figured it was — Immi was 9 lbs 12 ounces at the time. To her, that was 9.12 (in the real world, that’s really 9.75). So, she should eat 18.3 ounces. We kinda look at her funny, and question her about that, but she waves our concerns off. We weighed Immi before and after feeding and she was only getting 1 ounce from me after 40 minutes on the boob. She could eat 3 ounces in a bottle at that time. But, the LC tells us we need to feed the baby every 2 hours for the next 3 days, and only supplement with 1 oz in a bottle according to her math. Everything we’d read said that you multiply the babies weight times 2.5 to determine ounces. But, we figure she’s certified, she has to know what she’s talking about right?

Wrong. That bitch was flippin’ nuts. For almost 2 days, I starved my child because of that whack job. We thought she was fussy with milk/soy? You ain’t seen nothing til you underfeed a child. We finally call the pediatrician to find out what we should be feeding her. We should be feeding her 25.5 ounces. Ahhh. Mike talks to the LC and even confronts her about her awful math, and she still won’t admit that anything was wrong. To her, 9.12 is a bigger number than 9.2 (9 lbs 2 oz). Yeah.

A few days later we find another LC that is actually more in line with how we want to tackle the issue. I want to feed my child, and tackle my supply problem. I didn’t necessarily want to use her to do it. So, I would pump vigorously and feed my child. We’d meet again when the two got closer. She also knew how to do math, and that it was 2.5 times not 2. I got an herbal supplement, a prescription drug, and finally had some hope that this might just work out. I finally felt good again after over a month of misery. My child is finally home from the hospital! I should not have been that damn miserable!

Well, we are now at a month past then. My supply is definitely up. So you get a sense of the numbers… I was pumping about 20 ounces a day when Immi was in the NICU. When I stopped pumping due to the first bad LC advice, my supply went down to about 3 ounces a day. When I went to see the second LC, my supply was at about 5-6 ounces a day. I’m now up to about 12-15 ounces a day, but my daughter drinks around 26-30 ounces a day. I can’t manage to pump the requisite 8-10 pumps a day. I’m looking after a baby, a fussy baby. I can usually get in 7 if I work really hard at it. So, I can continue to struggle with this mess, worrying if my milk is still making her fussy, having to constantly supplement breastfeeding with a bottle which makes each feeding time take 1.5 hours usually, or just stop. Stop feeling the guilt. The shame. The judgment. I can stop all that and take all that extra time and just enjoy my flippin’ girl. Play with her, love her, and show her the world. Instead of feeling like I’m chained to the damn pump, and thus house bound at all times. The thought of leaving my house frightens me! This should not be how it is!

Another side topic… I am not the type of person to whip out my boob in public to feed my baby either. I have enormous boobs. They are GINORMOUS with milk, I am not even about to try to whip these puppies out “discreetly” in public. Not gonna do it. More power to the ladies that do it, and I feel like they should have the freedom to. It’s just not for me. I’m a closeted breastfeeder. Also, I never felt that awesome bonding thing you hear about. Probably because the whole thing is so damn stressful to me. I’m constantly thinking about this problem. When can I pump? Is she going to be too fussy for me to pump? Am I going to pump enough? Is my supply increasing yet? How long is breastfeeding suppose to take, cuz I really need to go pump so I can make my next target of pumping in 2 hours. On top of all this it’s getting to where I can’t sleep. I only get two 3-hour intervals to sleep at night usually. And for the first hour or two of that, my mind is racing with all those previous questions. It’s driving me mad! You get the awful picture.

So, just a couple of hours ago. I finally made the decision. I’m going to stop. I was surprised at how emotional I got once I made the decision. But the second I did it, my fussy baby stopped being fussy and looked up at her dad and me and gave us the greatest series of smiles. If I ever doubted it was the right thing to do, I do not doubt anymore. I gave her my milk when she needed it the most — when she was so tiny and needed every possible chance. I will always be proud of that. Now it’s time to give her ME. The fun me, the less stressed me, the mom I’ve been waiting to be.

ETA 8/4/12: Immi has been on frozen breast milk exclusively for the past 3 days. Her allergy symptoms have returned — congestion, more spitting up, explosive mucousy poos. That was milk from me being completely soy and dairy free. So, this is even more proof for me that I’ve done the right thing. I really don’t want to expose her to something else she’s allergic to and cause her more issues down the line. I’m going to investigate donating the rest of the frozen stash to the Milk Bank of Austin.