So, I just realized I totally screwed up on the alphabetical order thing. Whatever. This update won’t be filled with quite as much as hatred.

There are only two new shows from the CW that I’m watching. Sarah Michelle Gellar‘s return to television in Ringer is odd. I want to love it. I do. See, SMG is playing twins. One is a ex-addict, ne’er-do-well, that is on the run from some bad guys who she doesn’t want to testify against. The other is all fancy and girly and has everything a girl could want. Except maybe not! She “kills” herself, the other SMG slides into her fancy life and tries to live the great life. Gets a little complicated, natch. The first episode had me quite a bit turned off in the first 15 minutes. The twin thing was not the best filmed trick I’ve ever seen. Also, they used a lot of fake backgrounds and that wasn’t done very well either. Then… in walks Ioan Gruffud (pronounced “Yo-wahn Griffith”). Oh, he’s a beauty. Funny thing is, I didn’t even realize that he was in the show. Bonus! Anyhoo… the episode did get better overall. Enough to have me tuning in the 2nd week, and the 3rd. However, it is kinda losing my interest. SMG is always in some super-panicy mode, and it just gets a little exhausting. At this point, I will do Ioan a favor and keep tuning in. *eyebrows wigglin’*

The other show on the CW that I’m watching, and really by accident, is The Secret Circle. I didn’t do a lot of research on what all was new this year, so I didn’t even know this was on. This show is on cuz The Vampire Diaries has been so successful. So, I’m guessing the CW thought, hey, let’s take another book series from LJ Smith and make a show out of it. Total side note: LJ Smith is a crap writer. After watching The Vampire Diaries, I went and made the mistake of reading the first two books in that series. It was painful to read. I liked NONE of the characters. It truly amazes me that they made the show from this. I like the show, I hate the books. So, no way in hell will I try to read the The Secret Circle books. Yech. Anyway… short summary… bunch of teenagers are witches in a town that pretty much frowns on that sort of thing. It’s your basic teenage-soapy mess with some SFX thrown in. Your average person will not like this, however, if you’re like me and read Young Adult books like this anyway… you’ll dig it. Not as rockin’ as The Vampire Diaries, but it’ll do.

Let’s move over to Fox, and I’ll try to be quicker about these. What can I say, I’m verbose :P

We got New Girl with Zooey Deschanel. It’s not an awesome show, but I like it. Zooey D is just impossible to not like. She’s quirky, she’s goofy, and she sings her own theme song. So, our New Girl here has just been recently cheated on, and needs a place to live. She finds these 3 guys looking for a roomie on Craigslist *shudder*, and hijinks ensue. They replaced Damon Wayans, Jr. after the first episode. I guess that’s cuz his other 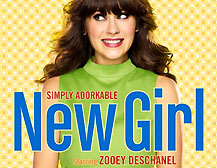 show got picked up. I liked him better than his replacement. But I’ll deal.

Let’s face it. I love me some sci-fi television. Which is kinda strange that I don’t read much sci-fi. When I first saw the previews for Terra Nova months ago, I literally laughed. A show with dinosaurs? Puh-lease. But, of course, I had to at least try it, no? Well, I was hooked pretty quickly. The show starts in 2149 and the planet is completely wrecked. The atmosphere has gotten so bad that everyone has to wear re-breathers when not indoors. There is a bit of hope. Scientists have discovered a rip in time or something to 85 Million BC. They have been sending groups of people back in time to establish a colony. It’s supposedly in a different time stream than current time, but I’m betting that’s not the case. It’s also a one-way trip. It has a bit of a Lost feel to it. There is a whole group of “others” called Sixers that are like rebels.

I also watched the first two episodes of The X Factor. I think I just might be done with all reality shows (‘cept Surivor), cuz I can’t really get into this to watch it again. I thought I would like it cuz Simon is back being Simon. Except he doesn’t seem as harsh. Then again, The X Factor is much more of a building of a talent. So, maybe there is just no need to be super rude at this point. Maybe that will come :D Also, I lurv the hootchified music that Nicole Sherzinger puts out and she has some great ta-tas, but damn, she’s a horrible judge. The original british chic was better. Also, the host? Yah, I’ve already forgot him.