Now that I’ve started writing up my feelings on these shows, I have started to see that I don’t seem to like very many overall. I didn’t really feel that way beforehand. But I guess when you actually put your thoughts to “paper”, you can see them more clearly. This particular trend continues with NBC’s new offerings.

First up is the oh-so-laughable The Playboy Club. This was the first show I broke my rule on, and just immediately stopped watching. OMG. This was just painful. My mom actually seemed to like it. Of the people I talked to about the new shows, she was the only one that seemed to show interest in this show. Probably why it was cancelled after only 2 episodes. Woohoo!

Next up are two 30-minute shows I actually talked myself into attempting. We have Up All Night with Will Arnett and Christina Applegate. They are basically some hipster folks who 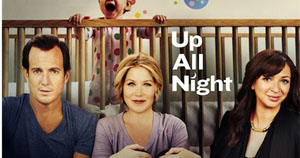 have recently had a baby that had not planned on. Maya Rudolph plays an Oprah-esque talk show host that is Christina Applegate’s boss and best friend. She is so clueless to the real world that this is where most of the comedy comes from. I’m on the fence on this one. I am still watching it. But what investment is it really for me to watch a 30-minute comedy out of the corner of my eye on Hulu? None. I’m very indifferent about this one. I will probably continue to watch it out of the corner of my eye while I’m working or something. And I wouldn’t be heartbroken if it were canned.

Free Agents… just found out it was cancelled. I thought it was OK. Hank Azaria and Kathryn Hahn were actually quite good together. And I really loved Hank Azaria’s secretary. Her mad-awesome indifference and honesty was hella awesome for some laughs. But, whatever. It’s gone. 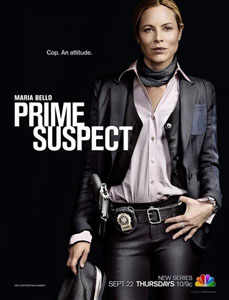 Maria Bello‘s butch-ass cop character in Prime Suspect is just typical cop fare to me. This is based on a British show that starred Helen Mirren. I’m betting this is no where close to the original. Well, that’s just been the case in most UK to US converted shows. It’s not awful. I like Maria Bello, but sometimes I think she is pushing the butch-cop thing a bit much. The hat? Hmmm. The gum? Annoying. And what’s up with her orange-glow? She’s a cop in NYC. I’m betting those don’t typically get a lot of sun action. But if you were to take it from this gal, they spend all day in the damn open air. Maria sweetie, it makes you look older. Doing you no favors.

Very interested in the upcoming Grimm show. Has a very interesting cast, and a very different type of storyline. I need something original, people. Let’s do better.