Ok, so it’s been a couple weeks since it actually occurred. But I wanted to write about it.

It was the 2nd pot-luck game night, and the first time Mike and I have had a bunch of people to this house. Hell, maybe even any place we’ve lived. I’ve always been kind of embarrassed of our house. Probably without real reason though. Now, I actually love our house, so I feel free to share it with the world.

We had people at both of our tables – dining & kitchen. There was tons of food. Italian was 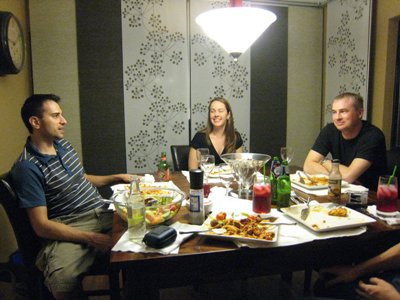 probably not the best of themes for a pot-luck cuz you just end up all carb’d up and tired after eating. I made my lasagna, but wasn’t totally thrilled with how it turned out. It was good, just not the normal caliber of my lasagna. Some of the other dishes were Chicken Parm, Meatballs, Ziti or Penne (I always get those mixed up), Salad, bread, and some desserts. After eating, Mike and a few others ended up on the Xbox 360 playing Guitar Hero III. The rest of us started with Uno, and then moved to Uno Attack. I think it’s safe to say that we had a great time.

I provided a Pomegranate Italian Soda/Vodka drink, and it was a whole lot more popular than I had thought it would be. I thought it might be a bit of a “girlie” drink, so I only purchased 3 big bottles of the soda. We also ran out of Vodka at one point, but Mike was nice enough to go get more. Once the Pomegranate Soda was out, a couple people moved on to cranberry juice, but it just wasn’t the same. That freakin’ drink has turned into my party beverage of choice. It’s also a very specific soda. It’s the Central Market Italian Soda stuff. Do not fret, you can find it at any HEB if you’re lookin’.

Game night seemed to open me up a little socially. And especially as far as my house goes. I don’t feel like it has to be perfect for anyone to come visit. Still has to be close :D, just not absolutely perfect. See, I’m learning.