After breakfast on the condo’s lanai, we walked all of 100 feet or so to Snorkel Bob’s to rent me some snorkel gear. We then got ready, and headed to Honolua Bay for some snorkeling. 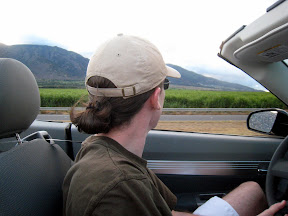 We were using our Maui Revealed guide and we weren’t completely sure where it was. On the way there, in one of those one way construction areas where they have to stop one direction of traffic for the other, we were offered some Maui Wowie from the waiting car on the opposite direction. Interesting sales tactic, I thought. Laughing about that, we continued, and did find the entrance to the trail to Honolua without too much hassel. The trail was pretty cool. It was very jungle-y. Very dense vegetation. At one point, it starts to smell funny and I notice a bunch of mangoes all over the ground. The smell would be something we would get to know quite well in Maui. Old, rotting, fermenting mangoes…. *shudder* We continue our trespassing hike towards the bay, and arrive to a moderately busy rock/boulder beach. I really do dislike the hardship of rock type beaches. 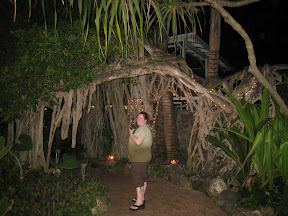 With some effort, we eventually get into the water and head out away from the other folks. It was really nice, though slightly murky. Saw all kinds of different fishies. Still no turtle, but we did hear a lady say she saw them out there. Bah.

Woo.. that couple of hours in the sun is just tiring! So, we went back to the condo and napped. What was funny about our naps, were that most of the time they weren’t intended. We would just end up laying on the bed thinking of something to do, being lazy, enjoying the surf noise, and poof, we’d be out. Based on recommendations from the guest book in the condo, as well as a couple we met at the lu’au, we made reservations for dinner at Mama’s Fish House. We then went out to our beach, and walked around the bend over some big boulders, and ate lunch at Gazebo’s. Which is literally a gazebo by the beach that serves food. It has maybe 12 tables in the whole joint, so we waited for about 30ish minutes. Nothing too bad. I had a Monte Cristo and Mike had some veggie burger I think. Not bad Not bad. Oh, and while we were eating, this bigass pigeon landed on this 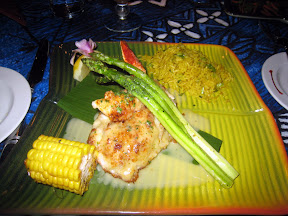 dude’s head behind Mike. It was funny, cuz this was a damn big bird, and the guy said he thought “Someone was getting fresh with him”.

I really can’t remember what we did next, hmmm.. maybe we ate then napped. Dunno, but there definitely was food and sleeping in some order.

Later on, we decided to head out towards the other side of the island for Mama’s Fish House. We headed out way early, with plenty of time to find the place. Well, right as we get past Paia, we see the traffic slow and a cop on the road. We quickly figure out it’s an accident and wait for a few minutes there. Once we realize we might be stuck for awhile, I look for an alternate route to Mama’s. I find one, so we turn around and head that way. This was when I first learned that if a road is on the map in Maui it doesn’t mean that’s it’s paved. It was mostly a dirt road through what looked like farm fields. And it also appeared that others in the other direction 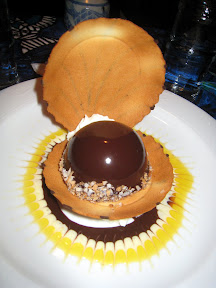 were having the same idea we did about bypassing the accident. So, we finally get back out to the main road on the other side, and realize we are stuck on this side too. That was good for a guffaw. As people turned around, and traffic move ahead every so slowly, we managed to get to the entrance of Mama’s Fish House and made our reservation right on time. Good thing we left early.

This place is nice. It’s close to the beach, it’s a very nice upscale place but has a great warm feeling still. We grab drinks at the bar as they are getting our table ready, then we get seated at a window seat facing the beach. And I mean facing the beach. Our table was a half circle table with the flat end up against the window, and we looked out the open window to the beach at night. We might not have been able to see much of the beach, but it was still quite beautiful. We got an appetizer of crab cakes that had a fire & ice relish that was insane. Mike ordered a mahi mahi dish, and I got a shrimp & pork tenderloin dish. We ended with the black mousse pearl dessert. So pretty it was almost a shame to eat. But not quite :D

Drove back to condo. Crashed.