Had the “usual” morning of breakfast on the lanai. How easy such things become the norm. “Yes, I lounge about on my lanai to eat my meals, while I look upon the beautiful water and beach, don’t you?” Slowly – very slowly – we started to get ready for the Road to Hana. We had planned to get up really early to go up to Haleakala for the sunrise, but we had an alarm snafu. 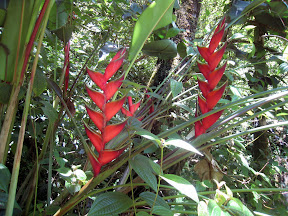 So, Road to Hana it is. In between getting ready we laid back down. So nice to laze about. We finally got the energy and left the condo at 11ish.

We decided to have lunch in Paia at a place called Cafe Mambo. The book didn’t think the place was stellar but it looked like our kind of place. We stepped in, and we were right. It reminded us of Austin even with it’s very hippie-artsy vibe. We had their Sesame & Nori Tofu Fajitas, and they were most excellent. No idea what the author of the guide ordered, but it definitely wasn’t these fajitas.

We then continued on past Mama’s Fish House and onto the Road to Hana, this was after 12. Yeeeiiikes. The road was crazy. There are supposed to be a ton of waterfalls on this road, but we didn’t see too many. We did get out for a couple, but it got old real quick to see they were trickles. Apparently this is the dry time of the year, so they tend to be a bit lacking. Maybe next time then. 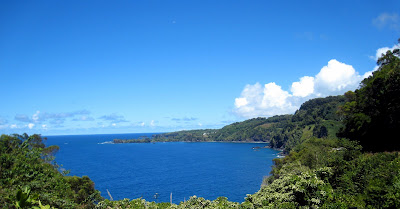 We stopped in Ke’anae, this wee little village type place on a peninsula, and stopped for some banana bread and shave ice – guava flavored. Mmmmmm. Best shave ice yet. Saved the banana bread for later. We stopped just a couple of miles past Ke’anae at the Halfway to Hana 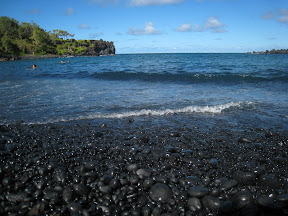 store and got more banana bread there. More driving through lush hills with the occasional rotting mango stink. Just before Hana, we stopped at the Honokalani Black Sand Beach in the Wainapanapa State Park. Mike hiked down it, I didn’t. I looked at it from above. I just wasn’t in the mood to get covered in sand.Â  Plus, it was so gorgeous from my view, I just didn’t imagine it got much better. We got to Hana, drove around there a bit (not much to see there), and then started back. I didn’t want to be driving that crazy road at night. On the way back we stopped at another little roadside stand and got some hot sweet corn on the cob. It’s hard for me to pass up corn on the cob after getting out of braces. Yes, I understand I got out of braces 3 years ago, but you be in braces for 5.5 years and not have some degree of food related trauma, I dare you. 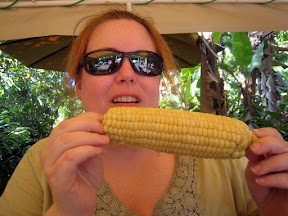 view. The water is must choppier on this side of the island, but apparently it makes for perfect wind-surfing conditions. We saw a few out there, but nothing crazy. We still watched them for a bit before heading back through Paia, then to Lahaina. We decided to eat in Lahaina at Bubba Gump’s. It’s a chain, but neither one of us have eaten there, so why not try it for the first time in Maui? On our walk along Front Street to Bubba Gump’s, I wanted to stop at Na Hoku, a Hawaiian jeweler. I don’t necessarily like to admit this, but I saw an ad in the Hawaiian Airlines magazine for a necklace that I really took a liking to instantly. We did go in, and I took a look, but without touching. If I don’t touch, I don’t have to have. But man-oh-man, I wanted it. I knew the one in the ad for the $299 price was going to be small, and it was, but the next size up was a whopper of a price difference. I decided to think it over, and we just went to eat.

I was very tired, so it wasn’t much more than ordering and eating. Not too much in the way of conversation or anything. Just wiped. The food was OK there, nothing to write

on your blog about or anything. We headed out and decided to go back into Na Hoku. This time I did touch, and tried on the small one and the bigger one. Sure enough, the bigger one looked perfect on me. Even Mike agreed the bigger one was better. We sifted through some different chains and I found a 20-inch one I loved to go with it. Then after that purchase we were informed that we qualified for a free pearl at The Pearl Factory store next door. We popped over there, and picked out a fresh oyster from a bucket and they opened it to reveal the pearl inside. The tricky thing here is now they want to sell you a setting for said “free” pearl. After much haggling with the persistent salesman, I finally ended up with their cheap ring setting. It took work though. Quite the scam these stores have together.

We head back to the condo, and I’m giddy the whole way cuz of my new sparkly bling. Off to bed though. There’s always tomorrow to admire the gorgeousness.