Mike had to get up early for scuba. So, I slept in… til 8:30 even! Did the morning thing of breakfast on the lanai. Then I proceeded to lay on the bed with my iPod to listen to an audiobook. And of course, I fell back asleep until 12:30.  When Mike got back he was crazy starving, so we got lunch at Maui Tacos. I had a Wet Napili Burrito. It was so good. Even better than the first Maui Tacos outing. Mike then needs to crash, so we go home and he sleeps, while I read and sleep. We finally wake up cuz we had to get up for Warren & Annabelle’s.

We managed to wake up late and got there about 15-20 minutes late. I thought it was a hard set time, but we were allowed in. When we arrived we were given a key and then ushered into this room with 4 doors and a bookshelf. We were given some clues and had to figure out where to unlock the room so we could get into the main room. We put it into one door based on a clue, and we were wrong. I think we may have tried another door and then finally got it.  (I won’t ruin it for others who haven’t yet attended a show there.) We selected some place to sit and ordered apps and drinks. Everything was very tasty. 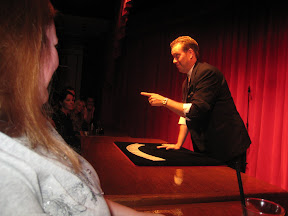 We were then given quite the show with a ghost playing a piano and a waitress singing along. Slightly cheesy, but still really fun. We were asked if we wanted to be in the front row for the magic show, and I begrudgingly agreed. This was truly what I didn’t want, but I figured I would try to be brave. We then went into the magic theater and I got the first spot to the left of the magician. This had me very worried, and rightly so. This spot ended up being prime picking-on spot. I had a whole lot to do with the first magician, and not quite as much with the second. Oh yah, we weren’t able to see Warren cuz he was on vacation, so we saw a couple other guys — John Shryock, and Dana Daniels. I found John Shryock more entertaining by far.

We left there and were back at the condo by 9:30pm. Crashed.

Such a rough day of sleeping :D