I re-read my last post and it makes me sick. Well, the last line does…

“Things could definitely be worse…“

Well, that was an understatement. Things got a lot worse. This is what we posted on FB –

Our son, Jeremy Blue Olivier was born on Friday, June 17, 2011 3:53pm. He passed away shortly after his birth. There were complications with the pregnancy. We had him for such a short time, but he has forever changed our lives.

I’m not going to get into the details or anything, but I feel like I need to post something about him and what we went through. I guess I feel like I couldn’t post anything else on my blog until I did this post. But, what do you say? I’m heartbroken beyond words… that’s kind of a given.

Everyone was so great to us. A lot of compassion out there, even from places I least expected. 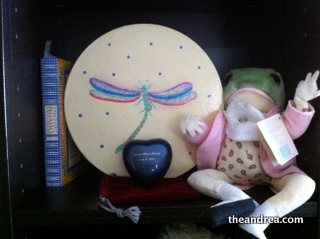 I also found that some people just didn’t even get it. I did not miscarry. Not to say that miscarriages are something that are easier, but in a way they can be. I was 21-weeks pregnant. I gave birth. I had an epidural and went through the whole shebang. He was 7 inches, 9.5 ounces. I held my dead baby boy… kissed his cold head… touched his little sharp finger nails. He had my nose! And he had Mike’s long fingers, and his chin, too!

And yet, I still got comments like.. “Well, if it was meant to be…”

Yah… I’m not friends with the people that said shit like that to me anymore.

So, this is probably not as monumental as maybe it should be. But I felt like I had to write something. Acknowledge our little boy Jeremy Blue, my Mister Blue… before I can get to a healthier place in life, or on this blog. It could not go unsaid.

I will miss my first born boy forevermore.