Being the film buff that I am, I have always wanted to attend the South By Southwest Film Festival, 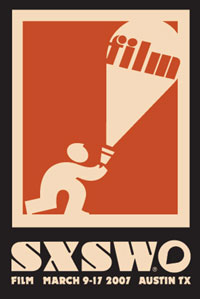 but have never been able to justify taking the vacation time. Well, I took the leap this year, and have bought a film pass. I’ve already attended 3 days of films, and I will write reviews for each one in separate entries. Mike has attended all the films with me so far, but I will be going solo during the weekdays. He might join me in the evenings if there are films he is interested in. I will being working a couple days in the mornings, but for the most part, I will be off. I’ve already learned my lesson this year, and I will definitely be taking the whole week off next year. I didn’t anticipate wanting to go to so many midnight movies, so that makes making it to work at 7am a bit difficult. Not impossible, but it’s definitely worth taking the time off to get enough rest before full days of movies. It might not sound like a rough thing to do, but walking around between movies and running to get something to eat quickly between showings, makes one quite weary in the end.

Look out for the reviews. I’m so excited and I’m having so much fun!