In a followup to my Hint & MetroMint post a while back, I thought I would add that MetroMint has

put out a new flavor. It’s ChocolateMint. And it’s friggin’ divine. You might think it does not sound refreshing, but you would be oh-so-incorrect. It’s very nice, light, and cool. Perhaps a good way to think of it is… it tastes like drinking a MetroMint Peppermint water after you’ve finished a chocolate bar (probably dark). I saw it on their website, and yes, the dork in me ordered a 5-pack to check it out. A couple weeks later, and it’s already in my local H.E.B. I love my H.E.B. They are quite quick to carry some unusual stuff. 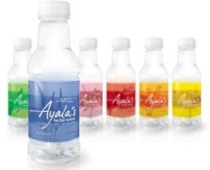 discovered from my latest grocery store trek is Ayala’s Herbal Water. OMG, delish! I’ve only tried two flavors so far, but I think I’m hooked. I’ve had their jasmine vanilla & cloves cardamom cinnamon. The ccc one was a bit strong in flavor (according to Mikey), but I loved it. Very different, very natural tasting, and plenty sweet enough without actually using any sweetener. The jasmine vanilla was a bit lighter in flavor. They also have lemongrass mint vanilla, lavender mint lemongrass thyme, cinnamon orange peel, & ginger lemon peel. I can’t wait to try them all. Another bonus about Ayala is they are a carbon neutral company. Can you get much better than that?