I have some weird issues with drinking enough water. I go through stages where it is next to impossible to drink water. I can guzzle diet coke like nobody’s business. But water. It’s like it’s non-potable sludge. However, if I flavor it up with some lime or something I can usually drink the day away with it.

it, they had tons of flavors like watermelon, cucumber, grape, lime. Probably like 10 or more flavors. Then suddenly they stopped making all those, and only made 4 flavors – raspberry, lime, grape, peach. The other stinger is they are now “lightly sweetened”. If there’s one thing I most certainly cannot tolerate in my water is a sweetener. I get migraines, and so I’m very sensitive to sugar, caffeine, and hydration in general. So, when I say I got nuts with DC it’s not that crazy because the caffeine can become too much. Anyhoo, I digress.

Once my FruitWater had gone and betrayed me with sweetener, I had to find other alternatives. I can’t remember how long, but it wasn’t terribly quick, I discovered MetroMint water… peppermint water that is not sweetened. And they say it’s not “flavored” since they use real mint. It is delightful. So refreshing. It’s been a couple years I think, and now they have 3 new flavors — spearmint, orangemint, and lemonmint. My least favorite is the spearmint, but I do love them all.

At the beginning of this summer, while on a mission to get some Function Urban Detox (excellent for

hangovers – drink half before bed, half when you wake) at the Whole Foods downtown I saw a bottle I hadn’t seen before. It appeared to be a flavored water, so I inspect the label to see what sweetener is used or how many calories it has. And I see the most loveliest of slogans on the bottle “Drink Water, Not Sugar”. I was immediately in love, so I wanted to buy everything they had. Mike, being the more sane of us, told me to just get a couple in case it tasted like complete ass. He’s wise, that one. So, after we get home and I get one chilled enough (beverages have to be damn cold for me), I tried one. It was the tropical punch one. I just confirmed the love at first site thing. It was amazing. I had found me a proper replacement. It is called Hint, and it’s such an appropriate 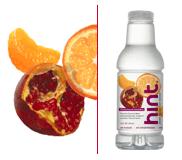 name. It’s water with just a slight hint of flavor. Enough to be not straight up water for my tastes. I have personally tried about 9 flavors — Tropical Punch, Pomegranate-Tangerine, Lime, Raspberry-Lime, Peppermint, Pear, Strawberry Kiwi, and Cucumber. My least favorite was Cucumber, and not just cuz it’s Cucumber. I’ve loved that flavor of water in the past so I was really excited to try it. For some reason to me, it tasted like plastic. I’m hoping it was maybe a bad batch or something, and I will attempt to try it again later, cuz it did seem to have some promise. I drink so much of this stuff, it’s insane. I pretty much fill up a cart at Whole Foods or H.E.B., any time I buy it. People look at me funny. The last time I went to Whole Foods, the guy was kind enough to give me their case discount, and told me I should just think of buying it in cases in the future. That’s a good idea. I think I’ll do that from now on.

I’ve even gotten my brother hooked on it. I’m just evil rotten that way.