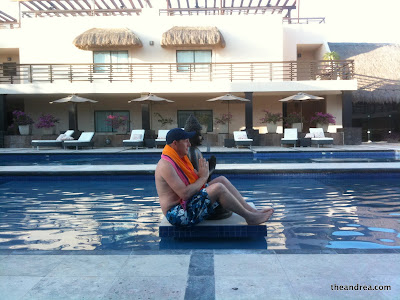 We wake up and we are redder than ever and in serious pain. But, we get dressed like we’re going to Xel Ha, in case we can’t change it. Luckily, we get there and we can change it to Thursday. Turns out to be a good thing all around too. Sarah was up all night because their A/C was broken (again!) and her tummy was bothering her too. Chris, Stacy, Reagan, Mike and I head to La Vagabunda for some very mediocre breakfast. Then, we part ways with plans to meet at 12:30 at our place to play some games in our hotel’s game room.

As Mike and I arrive back at our place, I see Sarah’s bags on our deck’s table. Then my eyes start to search around, where they land on one miserable looking Sarah in one of our hammocks. She figured there was no way I would be going to Xel Ha at all, so of course I would be there. The poor thing just wanted some A/C and understanding. Both of which she got.

We head inside and we proceed to sleep for four hours. Mike sleeps in a hammock in bliss for probably the same amount of time. I was glad she was able to get some decent rest with us or with our A/C… whichever.

As we are waking up, Stacy & Chris arrive a bit early and they want to eat. We head over to our hotel’s lunch area and eat there with a great view of the beach. The food wasn’t bad. We go back to our cabin/hut/room where Reagan is now sleeping in a hammock.

We make plans to head to Sarah’s pool instead of playing games, cuz I guess no one is in the mood. Her pool has spots of shade where ours has none. So, I can be in her pool with everyone and I can’t be in ours.

Chris & Mike head over to Chris’ place to book fishing and Stacy & I grab a cab over to Sarah & Reagan’s pool. The cab is for me cuz I can’t even walk in the sun covered in clothes. It kills my skin. So, I pay $3 for a very quick cab ride and Stacy tags along to keep me company.

We chill out at the pool. Chris & Mike arrive much later than I thought they would. They chill at the pool briefly, then we all gather while we dry off and whatnot. We watch some really sappy youtube videos (Christian the Lian, Andrew Johnston – Pie Jesu), then we go in search of food. We go to Diablito Cha Cha Cha, but quickly realize it’s not going to 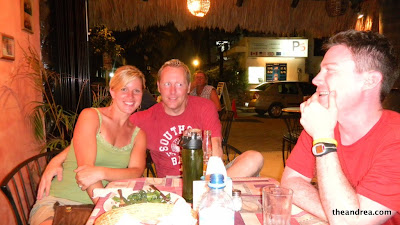 work. It’s a bit asian-y, and a lot seafood-y. We have a few diet restrictions in our group — a vegetarian (meh, pescatarian now), a gluten-sensitive, a seafood hater, and just a generally semi-picky eater. Usually we don’t have too many issues though. But this place just seemed to hit them all.

Instead we go over to our usual breakfast joint at the Hotel Eclipse Restaurant Bar. They deliver our food kind of one at a time and I get mine last. So there was a bit of an incident that proceeded to make me angry the rest of the night. Mike basically told me to shut up and eat since I’m a slow eater. That made me incredibly angry. But, while I ate, I spoke to no one. Meh. Boo.

We walked up 5th Avenue some more cuz we had to do a sneaky watch buying thing for Chris’ birthday. I got the sense he knew exactly what we were doing. It wasn’t really like we were that subtle. Mike bought a couple guayaberas at Kin Mayab. An orange one, and a red one. I spoke to him briefly enough to get my opinion of them across and that was that.

We ate some really expensive Haagen-Dazs, then slowly made out way back down 5th to La Parilla for everyone to grab a Coco Mango or beer. Then we parted ways with plans to meet at 12:30pm at the Webbers.

YES! A late starting day. Just what I’ve been waiting for!