That sums ups my every thought as I woke up. Every spot of burn stings so bad it’s insane. I cannot possibly imagine how I’m going to do anything today.

Mike, being the sweetie he can be, and forgiven from the previous night, goes out for breakfast at our place. He brings me back quite the haul too. Omelet, beans, 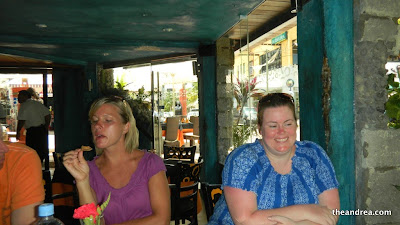 pineapple, canteloupe, and pastries. He drops that off and I eat while he goes out to get some vinegar for our wicked burns.

When he gets back, we both strip down, head into the shower and spray our burns down with some vinegar. We let that dry, and now we can actually move. I actually feel like I could even wear a bra. So, we get dressed, get into contact with the others, and head out for lunch. A birthday lunch for Senor Christopher’s 40th birthday. He chose Yaxche to eat at. Yay! So we cab it over there and eat with them. As much as I enjoyed the Pibil here, I had to trying something different. I chose the Kinich Chicken, which Chris had the previous time we ate there. It tasted even better than it looked. Such great spices and a great sweetness too it. The description on the menu calls it “An erotic kiss from the sun”. Hellz yeah it is. It was grilled chicken over a bed of mashed potatoes, with some assorted vegetables. Everything was topped off with a decorative fried plantain. It was just awesome. Yaxche became my favorite place to eat.

After lunch, the rest of the gang head out to Cancun for shopping and walking. Mike and I stay behind to rest and give our skin a break because we do have to go to Xel Ha in the morning. Plus, do not come here as a 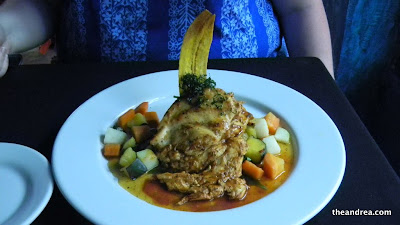 non-skinny girl and think you’re going to do any shopping. Well, maybe you’ll find something at Wal-Mart. Shopping is miserable for me. It actually depresses me to watch two other skinny girls check out stuff and be all giggly about it. So, sunburn or no,  a Cancun trip for shopping sounds about as fun as having a sunburn.

Mike and I go back to our place, strip again and reapply the vinegar. The rest of our day will be very uneventful. Read, sudoku, sleep for 4 hours. My burn was stinging like crazy so I opted to switch to lotion this time around. A little more chill time, then Mike and I headed over to dinner at our hotel. We had the salad bar, a chicken noodle-type soup, and a fish dish. We then opted for one of each of the desserts — fruit tart & vanilla ice cream. The vanilla ice cream was like Amy’s Mexican Vanilla ice cream. It was delicious. And now we know why it’s called that.

During dinner there was this pretty cat walking around all the tables. At one point he stopped by my feet and gave me those puss-n-boots eyes. Mike insisted I not acknowledge at all. It was SOOOO cute though. It was really hard to ignore him.

After dinner, we hopped online to see if the rest of the gang was back from Cancun. Eventually Chris did get online and say they were back, but they were done for the night. We went out to our beach and looked at some stars and then went back to apply more Banana Boat Aloe After Sun Lotion

. We’re a mess, but at least we’re a mess together.