I started the morning with Reel Shorts 1 & 2. I won’t get into any crazy detail, but the short (teehee) of it is I liked Reel Shorts 1, and Reel Shorts 2 was just eh. Those were at Alamo South Lamar. 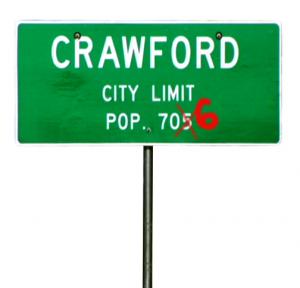 Crawford. Curiosity basically drove me to see this one. Living in Texas, it’s almost.. no, truly.. embarrassing to know that Bush is from here. I couldn’t imagine living in the very town he lives in. But, I must remember that Austin is the polar opposite of the rest of Texas. So, I shouldn’t have been surprised that Crawford was generally excited to have him move there. After a while you see the attitudes change. This was a really well made documentary. I thought it showed many opinions and pretty evenly too. On top of the great content, the film looked amazing! I’m sure it was an HD format but I don’t know for sure. I don’t know if I’ve even seen any film look quite that clear on the screen at SXSW. Very well made, and I truly recommend it. Hopefully everyone gets a chance to see it. 9.5 out of 10

Out of laziness, I stayed at Paramount for the Helen Hunt directorial debut — Then She Found

Me. It was between two other movies I wanted to see, so I stuck around. I’m not generally a big fan of Helen Hunt. I don’t know what it is, just not a fan. To my surprise, a very svelte and gorgeous Helen Hunt introduced the film. She said it had taken her 10 years to make this film. Dang, That’s some serious commitment. It was slightly chick flick-y, but not overly so. But, I’m a chick, so I guess it might be hard for me to judge. I found myself actually liking the film and Helen Hunt. It certainly didn’t hurt that Colin Firth was one of her co-stars. YUM. (He’s my original Darcy after all). From a filmmaking standpoint, I was a bit surprised. There was a section of film where you saw the boom enter frame a lot. And I’m not talking little dip here or here. No, no. Full on boom… clear as day. I was a bit baffled. Another thing I noticed was battery packs for the actors’ wireless microphones. Now, I may be overly watchful for this type of thing, since we’re still in the middle of filming, so I have goofs/continuity crap on the brain, but dang. It was getting borderline ridiculous. Rob’s wife Alev even noticed a battery pack guffaw. Anyhoo, I digress… I thought the story was unique and certainly not overly cutesy like I was expecting. When the film was over, everyone sat there waiting for Helen Hunt to come back out for a Q&A. Unfortunately, we were all disappointed. No one came out. Dis’d. 7 out of 10

The last film of the evening was Harold & Kumar Escape From Guantanamo Bay. I’m almost embarrassed to say that I wanted to see this. I’d like to say it was because I was looking forward to see who was going to be on panel, if anyone. Which I was, and I always am, but I was really looking forward to seeing a stupid comedy. Sometimes I can get so wrapped up in some serious docs or narratives, so a break of laughter is appreciated. I’m definitely glad I went. Stupid, silly, great fun. Harold & Kumar are their usual selves. The film actually starts right after the previous movie. I won’t go into a full-on description cuz I’m sure most know. Afterwards, a slew of people came on stage for Q&A. We had to co-directors, John Cho, Kal Penn, and Neil Patrick Harris. NPH was probably even funnier on stage there than in the film. Don’t get me wrong, he was crazy hilarious in the movie, but he was insane hilarious on stage. I’m not positive, but he may have had a little help from one substance or another. Good times, love to laugh. 8 out of 10