I took the first day of SXSW off, even though the movies didn’t start until the evening. I have to have time to prepare you see. Rest, relax, basic slacking. I had planned on going to the panel on getting the most out of SXSW. But as usual I didn’t plan well. The traffic at 2 pm was worse than rush hour then combine that with the pouring rain. Not pretty. So it took me 45 minutes to get down to the convention center. I still needed to get my goodie bag. I managed to snag a meter spot and only had to pay 75 cents to park. Even that was overkill cuz it didn’t take me but ten minutes to get in and out. The ride home took me an hour cuz of the scared pansy drivers. You’d think it was ice and not just a wee bit of water. 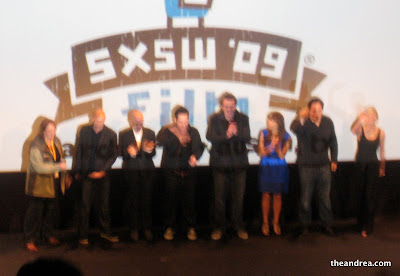 Later, Mike and I headed down to Paramount to catch I Love You, Man. I went to my badge line which was INSANE and Mike went into his little film pass line. I got us seats, Mike was able to get in, and voila. The entire main cast were there and it was very cool to see them. Excuse the blurry picture, but we were quite far up the balcony.

The movie was hilarious. Paul Rudd was excellent. Understated, which made the hilarity that much more yanno, hilarious. The Q&A afterwards was a bit of a bummer, because Janet Pierson obviously didn’t think about what kinds of questions she would ask her first Q&A at her first screening of the first year as her being the director for the SXSW Film. If that were me, I think I would have practiced about 100 questions to ask. Just to have them in the pocket and ready to go. Instead of fumbling around, hemming & hawing. Bah. Makes me miss Matt Dentler, that’s for sure.

We stayed at Paramount and watched ExTerminators, with Heather Graham, Jennifer Coolidge, and Amber Heard. It was filmed in Austin, so that was excellent of course. It was about a group of ladies in an anger management group that decide to take matters into their own hands when it comes to the men in their lives. Very good stuff. Heather Graham was very good and I’m not usually that impressed with her. Mike also said she has “awesome boobs”. Yes, yes she does.