It’s Immi’s first Christmas. I should be elated, overjoyed, ecstatic even. In some ways I am, but in other ways I’m not. 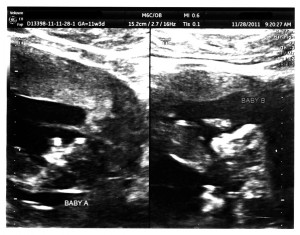 Let me introduce you to Connor Elliot Olivier (Baby A), brother and twin of Imogen Marie Olivier (Baby B). Some people know about him, but most don’t. This time last year was literally the worst time of my life. I do not exaggerate. It was miserable.

The Monday after Thanksgiving we went in for a routine appointment with our high-risk OB. Since we were doing IVF, and I’m wicked old, and I’d lost a baby, I’m high risk. Go figure. So, we go to our appointment, only to find out that one of the babies has heart issues. We did further testing and found out that the twins were a boy and a girl. The boy had the heart problems. He would most likely not survive much longer. We already had a trip to Hawaii booked. We went to Maui & Kauai. It was a beautiful trip, but I was pretty miserable the entire time. I couldn’t stop thinking about the baby boy. Was he still alive? Was he getting worse right this second? How was the girl? Would she know about her brother deep down? Would she miss him? It was just a total mindfuck all around.

We were both so miserable, we didn’t do anything for Christmas. I did manage to put up our tree 3 days before Christmas. I was glad I did. Our cat Toe, who we also call “Christmas Kittie”,  LURVS her some Christmas tree. She can’t get enough. She likes to lay under the tree belly-up staring up at the tree when it’s all lit up. It gave me a little happiness when there was none to be found. That also reminds me. This time last year we had all our 3 kitties. They were all healthy, alive, and cozy lovely. (We’ve lost 2 of them this year – Sundae in March, and Mama (aka Walla) in October.)

We ate Christmas dinner at Threadgill’s. Usually that would bum me out, but it was actually kind of awesome. The food was delicious and it was a great vibe there. We didn’t have to fake being all holiday cheerful with family or anything. No pretending, just the two of us at a restaurant eating good southern food. I even cheated on my gluten-freeness and ate some chicken-fried chicken. Treat for me, but I definitely paid for it about an hour later. Quickest reaction I’d ever had. S’ok, it was totes worth it.

My mom came to visit after Christmas since we were so miserable, and she wanted to hug me. She’s a great mom that way. While she was here, we found out on December 30th that Connor was gone. There was some risk to Imogen, the next couple weeks would be stressful too. Once we passed those couple of weeks I thought we were in the clear.

But we all know the risk was not over. The reason Immi came early was Connor. He had settled onto my cervix and my cervix started to thin. Thus, I was put into the hospital on bed rest. I gave birth to Connor on April 3rd. Immi was born April 7th.

EDITED TO ADD: I started writing this about a week before Christmas. In that time, maybe because of putting these thoughts into words, I was able to get more into the Christmas spirit. My only regret is that my mom and brother weren’t with me. But otherwise, it was a pretty fantastic holiday. Next year will be oodles and oodles better even, I imagine. Immi will be older and I’m guessing more into getting gifts and whatnot. I’ll actually do stocking stuffers, and maybe even shop earlier than a week before Christmas. I will always think of Connor with a bit of sadness this time of year, but for Immi it will always be a happy time. I’m sure the pain will lessen every year that passes. I will always remember 2011 for being the year I lost my 2 baby boys. It was a total suck ass year. But, I’ll look into Immi’s eyes, and it will always make me smile. I might not have my boys, but I do have her. And she is precious and magical and the happiest baby I’ve ever encountered. I really can’t ask for more than that.

So, with that, I say Happy Holidays.