So, it’s like summer or something. And I felt I needed a new theme on the page. I put one on *reveals like Vanna White*, but I’m not in love with it. I’ll find something soon, I’m sure. But until then, it may be a little schizo up in dis here page. I don’t really have much to add. I don’t know why… cuz it’s not like I’m not a talkative sort. But, whatever. I shall ramble or something. 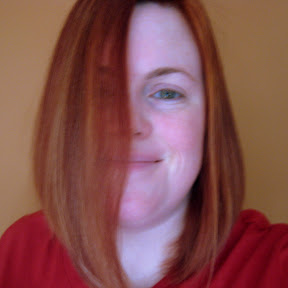 So, I got a major hair cut. I literally decided to do it on my way to my stylist. I thought I would have to scream & cry the next day, but oh-no! I adore it! I even have to “style” it, and I still love it. WHAT?!?! I know, it’s so crazy.

I’m not sure you can tell from my post so far, but I’m still in a pretty good headspace since the last time I mentioned being, yanno, happy and shit. Still am … LOOK! Goofy grin. But a grin.

Going camping/cabin’ing this weekend with my bud Sarah and her fam, and Mike of course. Hopefully I will remember to actually take pictures. I doubt it. But I do have my iPhone now.

Oh yah.. I have my iPhone now. So, I promise you won’t hear me bitching about not having one. Heh. 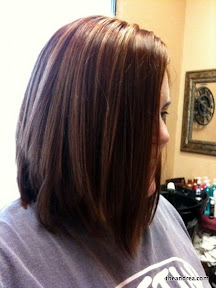 So, here’s another hair pic, cuz I know you were just DYING for another. TADA. This one is from when my stylist did it. See, cuz she knows how to do such things. I am not quite as fortunate, YET.

Hmmm… I feel like I need to write more. Mainly cuz the design aesthetic of my post will be all screwy unless I put enough text to go around this last image. Is this enough yet? Nope.

OH! How could I forget the eventful weekend I just had?!?!?! So, last Thursday afternoon I started to get a headache. It wasn’t too big a deal, but it just had this feeling. I knew it was gonna turn into a migraine, but boy I had no clue really. So, later Thursday night it turns into a migraine. Shocking, I know. I kinda get rid of it. Well… tamed enough to work the 2nd half of Friday. But then by the time work was done. Yeow. Back to migraine. Then on Saturday, I pretty much couldn’t get rid of it. I had an ice pack on the back of my head pretty much the entire day/night of Saturday. It was the ONLY thing that would do anything for me. I really hate taking my migraine med – Imitrex – cuz it tends to make me feel twice as bad before it makes me feel better. But I did end up taking it Thursday night and then Saturday at some point. GAW. I hate that stuff. By Sunday early evening, I was actually starting to feel quite a bit better. I chilled out and took a bath, read a little. That might have been a mistake. You know.. the whole using of the eyes thing. I dunno… but whatever it was… SLAM! Migraine came at me faster than a speeding jackhammer and I was in tears. I go back to my trusty ice packs, but even then, I can barely breathe the pain is so bad. At about 10:30pm, I finally ask Mike to take me to the ER.

We get to the ER, and they see me pretty quick. I fill out my paper, sign it, as Mike is coming in from parking the car, they have me back there starting with stats and whatnot. From there they put me in my little curtained area. AND the nurse was so incredibly thoughtful because she left the lights off in my area. Another nurse was telling Mike to turn on the lights, and she corrected him real quick. I strip the upper body, but on my nice hospital nightie and a few minutes later the doctor comes in. Young-ish guy that had a bit of a military-ness to him. But I’m simply speculating. And I was half nuts by this point. So, it could have been a female for all I know. He tells me what he’s going to do. He’s gonna give me 3 meds and some fluids. YahYahYah… just STICK ME already. First comes the fluids… ooh nice and cool, I likey. Then comes the Benadryl (in case I’m allergic to anything they give me)… oooh, trippy. Then they piggybacked that with Toradol and Compazine. After about 15 or so minutes, I go from my nice trippy la-la state to OMGOMGOMG I must move, I can’t sit still. But since I’m hooked up to an IV, my only option is to rock back and forth. I kid you not. I finally let Mike go find someone cuz it’s getting bad. I start pulling on my toes while I’m rocking back and forth. It’s just nuts. The nurse comes, he calls the doc, the docs says he’ll come back soon. Like what seemed like forever to me, 30-45 minutes, the doctor finally comes back and says “So, how’s the headache?” (headache? douchebag, it’s a migraine, it’s so very different). I tell him, what headache? No ache in the head at all. Now, what about this weird antsy anxiety thing I got going on. Him – “Yah, looks like we traded one problem for another. But at least the pain is gone.” ha ha NO. He tells me they will give me some Ativan and it might help, but I should just keep taking Benadryl every 6 hours, cuz it’s all basically an allergic reaction to Compazine. And off ya go… BuhBye.

I think the Ativan helped, cuz I don’t really remember the drive home, and the next thing I do remember is waking up like EONS later it seemed. All in all, we were at the ER for 2-2.5 hours. I was pretty impressed by that. I come from an Army brat background and if you aren’t in an ER for at least 8 hours, you just had a lengthy doctor’s appointment.

So, next day I take my Benadryl every six hours (I added some Valium in there too, same crap as Ativan), and slept all damn day. If I didn’t sleep I would have gone nuts with the constant need to be moving. By Tuesday evening, I was finally feeling this || short of normal. For me, anyway.

Wow, look at that. I didn’t have trouble filling up that space after all. Toodles. It’s late now. I have a really early laser hair removal appointment (the whole shabang baby! :D) in the morning and then off to the campin’.

I hope everyone has a great, fun, safe, Independence Day weekend!

Just a quick note here. I do plan on expanding on this subject later. But for now…

Over the past year or so, I’ve been slowly sinking back into my depression. It finally clicked that maybe my regular doctor isn’t the best person to be figuring out my brain chemical issues.Â  So, I went to a psychiatrist, and she has me on a new medication. I’ve been on it for about 6 weeks now, and I feel AMAZING! I haven’t felt this good in probably 13 years. I feel like ME. Anyway… this is just leading up to show aÂ  pic of me. I don’t like pics of me in general, so this is monumental folks. This was me yesterday. I just really liked how happy I looked and wanted to share.